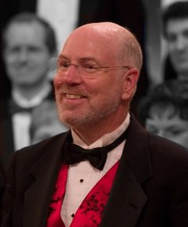 Bay Area native and Oakland resident Sanford Dole received his BA and MA degrees in composition and conducting, respectively, at the San Francisco Conservatory of Music and has devoted his entire professional life to the Bay Area. He currently is Artistic Director of Bay Choral Guild (BCG), based in Palo Alto, which performs regularly in San Francisco, Palo Alto, and Campbell, and Artistic Director of The Sanford Dole Ensemble, as well as  Music Director at St. Gregory of Nyssa Episcopal Church in SF.

Mr. Dole was a founding member of Chanticleer, which has made legendary musical contributions to the Bay Area and beyond as well as Assistant Conductor (1987-97) of the San Francisco Symphony Chorus. Mr. Dole has composed/arranged 34 sacred and secular choral, solo, and instrumental works. His work for chorus and four-hand piano, The Fabric of Peace, was commissioned for the 2009 50th anniversary celebration of the Oakland Symphony Chorus.

Mr. Dole’s organizational commitment has been critical to the survival and growth of both Bay Choral Guild and Sanford Dole Ensemble, and to their consequent ability to provide professional and non-professional choral singers, instrumentalists, and soloists with performance opportunities and local composers with a showcase for their work. His musical artistry and creative programming of repertoire from many musical periods and genres contribute greatly to the musical life and culture of the Bay Area through programs that delight, educate, and inspire their audiences.

Diane is a native of Tucson, AZ. She holds Bachelor and Master of Music degrees in Organ Performance and Pedagogy from Brigham Young University. Her musical career has included serving as a Guest Organist at the Salt Lake Tabernacle from 1994 to 2012, teaching piano and organ lessons both privately and in groups, and teaching preschool music classes.

As an active member of the American Guild of Organists, she has served on the board of the San Jose Chapter for many years, including serving as Dean from 2011 to 2013. She is Organist at the First United Methodist Church of Palo Alto and staff accompanist at Los Altos High School, where she has accompanied two international concert tours for The Main Street Singers.

Diane and her husband have lived in the Bay Area since 1999 and are the parents of three children.