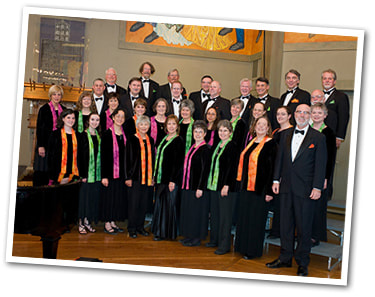 Sharing the joy of choral music with engaging, high quality performances and innovative programming of traditional and unusual works. Founded in 1979, BCG fills an important role in the music culture of the Bay Area, performing choral repertoire that span the twelfth to the twenty-first centuries, drawn from a broad range of musical cultures and a wide variety of musical styles. In addition to well-known choral masterpieces, our concerts regularly include recently-discovered works by less familiar composers, works commissioned by BCG, and premieres of works by contemporary American and San Francisco Bay Area composers, including Sanford Dole, our Artistic Director.

​Developed by Sanford Dole, BCG’s thoughtful, innovative programming inspires new insight and understanding of the music performed throughout the concert season. Programs often include exciting and challenging stylistic counterpoint with the juxtaposition of works from eras perhaps hundreds of years apart, but which use the same text. These juxtapositions expose both singers and audiences to nuances of choral and cultural development over time and involve audiences as participants, not just observers.

BCG’s reputation for high-quality performances underscores the ensemble’s ability to execute on these vocal and stylistic challenges. Under the leadership of Sanford Dole, the group has developed the ability to perform demanding repertoire from Renaissance to Modern, in a wide variety of musical genres and languages. “This is an ensemble that clearly takes both its music and texts very seriously.”  San Francisco Examiner, Arts and Entertainment review, June 6, 2010

​BCG is funded in part by a grant from Arts Council Silicon Valley, in partnership with the County of Santa Clara and California Arts Council.